The trilogy of love stories of the Ballinger sisters (Mona, Shara, and Reeba) who are blessed with the ability to predict true love for a person by a simple touch–a special family gift passed down to all the women in their family since the late 1800s including their beloved twin aunts, Winnie and Millie. 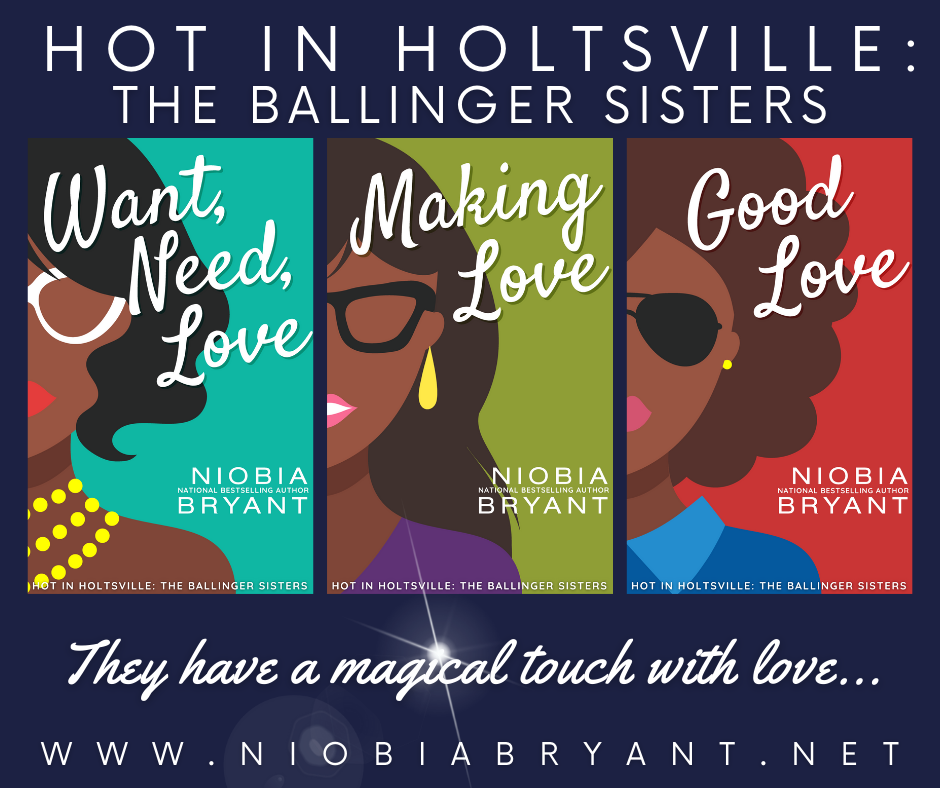 Finding Mr. Right isn’t easy, but in this sexy new novel from bestselling author Niobia Bryant, one woman knows exactly how to do it–for everyone but herself…

Mona Ballinger has a talent for bringing the right people together–and keeping the wrong people apart. But when Anson Tyler’s fiancée ends their engagement thanks to Mona’s advice, he angrily confronts her. Unfortunately, Mona has not only caused him a break in his well-laid plans -she ends up giving him a broken leg as well…

Guilt-ridden over Anson’s injury, Mona decides to help him recover-whether he likes it or not. Soon, comfort turns to chemistry and it seems like Mona may have found a love of her own-until Anson’s handsome brother, Hunter, shows up. His hot pursuit of Mona leaves her conflicted and she flees the small town in South Carolina she calls home for some family wisdom back in her hometown in New Orleans. But the choice she makes only fuels the brothers’ rivalry. Will Mona end up alone once more?

Please note: Want, Need, Love was originally published in 2014. This is a reissue with a new cover. The paperback edition is not currently in print.

In this next “sexy, funny, and oh so real” installment of the Ballinger Sisters trilogy, national bestselling author Niobia Bryant finally tells the story of just which Ballinger sister is the soulmate of sexy playboy Hunter Tyler…

Reeba Ballinger is a talented baker, dedicated business owner, and descendant of generations of Ballinger women who have the gift of premonition to see the soulmate of anyone they touch—a special gift she reveres. She has found the love of her life and is prepared to marry him…until she discovers that she has gotten it all wrong because her soulmate is none other than the arrogant, cardiothoracic surgeon-to-be, Hunter Tyler—who is admittedly handsome and intelligent—but just very aware of it in the most aggravating way!

Although Hunter has made it his business to outlandishly flirt with all three of the beautiful Ballinger women, it was always Reeba that truly made him feel excited whenever they were around each other. With his older brother now married to her older sister, that’s very often. He’s focused on building his career as a surgeon, but Hunter is intrigued by the very idea of Reeba being the “the one” for him. He approaches her about putting aside their differences and exploring the possibilities…together.

After dating and stumbling through many rough patches, a visit to the aunts of the Ballinger sisters enables Hunter and Reeba to see a vision of their future together—a future filled with love, children, and happiness. They decide to wed but the years that follow are anything but bliss, leaving both to wonder just when will they get to the good part.